This form needs Javascript to display, which your browser doesn't support. Sign up here instead

November 2021
Is There Innovation In Center Store Aisles?

May 2021
The Future Of In-Store Restaurants

For Updates to Come 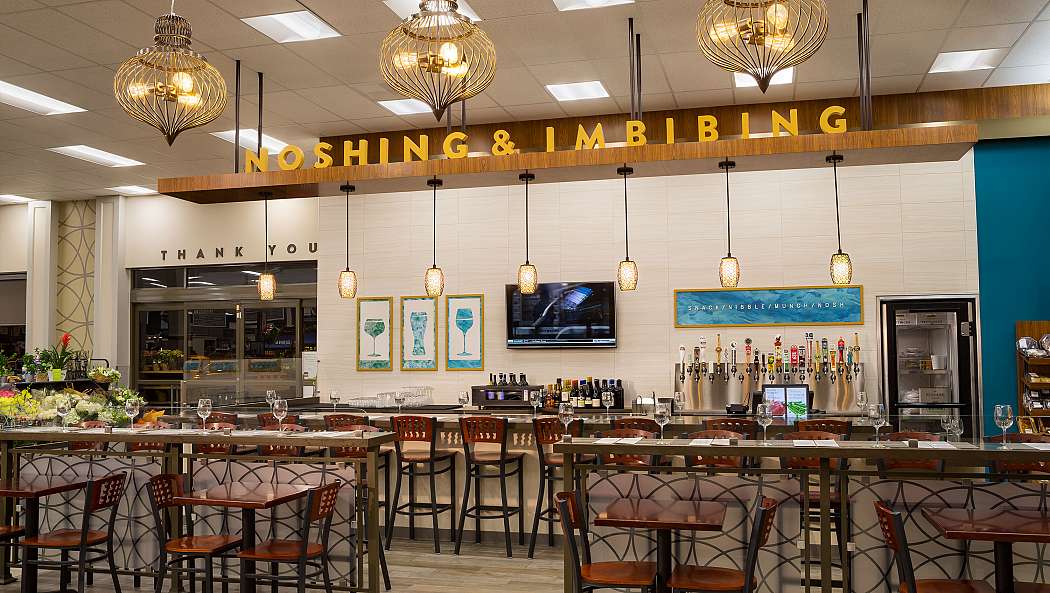 Most Shook Kelley projects happen outside of Los Angeles, so it’s always nice to have a local project that lets us gauge reactions from friends and colleagues. Case in point is a series of projects for Gelson’s Markets throughout Southern California. A few weeks back, a friend who lives nearby one of the remodels texted me photos of her and her partner at the store on a Friday night: “Date night at Gelsons!” it read. They had a babysitter look after their toddler, so they could hang out at the store a mile down the road. I was flattered. And a bit surprised. Her neighborhood has loads of great bars and restaurants. Why Gelson’s?

In the now distant past, young adults started families and left most of their social life behind. But today’s thirtysomething (and beyond) seeks and struggles to strike a different balance in life, and doesn’t want to abstain from being a social animal. So if the clubs, concerts and dive bars of their youth don’t suit them anymore, where do these people go to convene?

How about the grocery store?

Gelson’s is like reinventing adult contemporary music for the 21st century—proof that life doesn’t have to be boring once kids and careers intervene.

Shook Kelley has been working with Gelson’s Markets throughout Southern California on strategy and design work, as this everyday premium brand seeks to acquire new stores and build on its legacy to reach new audiences.

One remodeled Gelson’s store is in the Los Angeles neighborhood of Silver Lake, what Forbes called, “America’s Best Hipster Neighborhood” (ironic to the locals, of course). Silver Lake is also home to one of Whole Foods prototype “365” stores, which targets an audience of busy millennials who never learned to cook, but also love their fresh organics and health food supplements. Adjacent to 365, literally and figuratively, sits the new Gelson’s concept, resolutely for more sophisticated adult tastes. Gelson’s is like reinventing adult contemporary music for the 21st century—proof that life doesn’t have to be boring once kids and careers intervene.

In a recent edition of LA Weekly, food writer Besha Rodell unexpectedly reviewed the bar, with the arresting headline, “The Best New Bar in L.A. is at the Gelson’s in Silver Lake.” That’s not something you often hear included between the latest Los Angeles restaurant reviews. In the article, Rodell tells a story about meeting up with some of her middle-aged female friends at Gelson’s:

I've never seen such pure delight as the look on the faces of women entering the Silver Lake Gelson's and seeing friends drinking at the new bar just to the left of the store's entrance. It's 4 p.m. on a Friday afternoon, and my friend Madeleine and I have perched ourselves at the very corner of the bar, right next to the sliding doors, so that it's impossible for entering customers not to see us.

As Rodell rightly explains, Gelson’s is part of a larger trend among supermarkets introducing bars (Whole Foods, Hy-Vee, Wegmans, many others). But what’s strangely refreshing about the Gelson’s bar is that it’s not trying too hard or pretending to be something it’s not. While the other supermarket bars try to create a, “bar-like vibe with lower lighting and an out-of-the-way location” the Gelson’s bar is more genuinely aligned with the social fabric that already exists at the store. And in doing so, the bar manages to solve the problem of adult friendship, especially for women, rather than trying to escape the responsibilities of being an adult. As she puts it:

I'm pretty terrible at maintaining a normal social life with other parents, much of my interaction takes place when I run into people in the aisles of Gelson's. Would a bar provide higher quality socialization with those people? Might it be possible to say, "Hey, wanna grab a beer?" and have a more memorable conversation than one you might have while standing awkwardly by the overpriced tropical fruits? So I asked one of my friends who I usually bump into at Gelson's to meet me at the bar. And before you knew it, we had a mom party on our hands.

This is an occasion for neighbors, acquaintances and possible friends to get to know one another better and share in genuine conversation.

Rodell is right on. What makes convening work at the Gelson’s bar is that the experience accepts and embraces the brand and their ideal audience. These aren’t patrons who are going to sit and watch a football game with old buddies. This is an occasion for neighbors, acquaintances and possible friends to get to know one another better and share in genuine conversation.

After Rodell tallies off the perks of a Gelson’s bar—great prices, nice snacks, food samples and the “you sip, we shop” program—she gets to the heart of the problem of belonging that Gelson’s solves:

I shared conversation and clinked glasses with women at whom I normally might have nodded clumsily as we passed in the pasta aisle…The TV show "Cheers" was invoked by almost everyone, and I found this particularly telling. Bars where you feel you belong are harder to come by once you're a parent…A night out with other moms is something that must be planned ahead, babysitters must be arranged; it's anything but casual. But running into someone at the Gelson's, sitting for 20 minutes and having a tiny beer and a catch up? That's doable, and natural, and feels like it offers the kind of community that's hard to find in modern adult life.

Gelson’s is not chasing millennials or trying to be something they’re not—they’ll leave that pursuit to 365 and others. But when the time comes, they’re prepared for people who have gained a few life experiences to grab a stool and join them at the bar.

Or in the words of my friend who visited Gelson’s for a Friday date night: “Mom party at the grocery store bar? Yes please!”

When the time comes, Gelson's is prepared for people who have gained a few life experiences to grab a stool and join them at the bar.